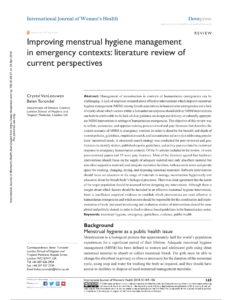 Vanleeuwen et al. (2018) in a literature review of 51 articles: Improving menstrual hygiene management in emergency contexts: literature review of current perspectives  grouped literature into six categories: supportive menstrual materials, sanitation infrastructure, knowledge and education, health, social context, and gaps between policy and practice, and current guidelines. This review indicates that there is still a lack of evidence on the application of interventions for the components required in MHM in the field. Moreover, though dignity kits often include both reusable items, such as clothing, buckets, and shoes, and disposable materials, such as sanitary pads, there is a lack of renewing supplies on a monthly basis. Besides, although there is an agreement about assessment of women and girls needs before designing an intervention, the organizations tended to distribute mainly disposable menstrual materials and no studies about new products were found with a focus on humanitarian contexts. Furthermore, the gaps still exist about which indicators can be used to monitor and evaluate MHM interventions as well as lack of clarity about how to identify key components of an MHM response in different emergency settings. The authors also provide some recommendations on how to address these gaps. 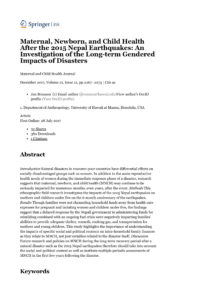 Brunson, J (2017) reports on a qualitative field research through semi-structured interviews with 14 women as well as 3 interviews with health practitioners in a peri-urban, multi-ethnic region of two districts, namely Nuwakot and Kathmandu in Nepal after the 2015 earthquake: Maternal, Newborn, and Child Health After the 2015 Nepal Earthquakes: An Investigation of the Long-term Gendered Impacts of Disasters. The study aims to explore if the conditions of disaster recovery in Nepal experienced at the household level posed new or worsened existing challenges for maternal, newborn, and child health (MNCH). Throughout the investigation, the author identified gender-specific challenges such as experiencing a shortage of sanitary products to manage menstruation that women face in combination with experiencing lack of adequate shelter, clothing, food, or clean water. 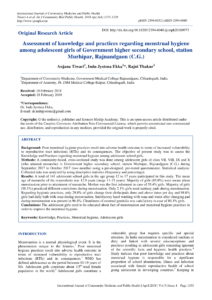 Tiwari, A et al. (2018) report on a community-based, cross-sectional study with a sample of 141 adolescent school girls with the age-range from 12 to 17 years from Rajnandgaon, India: Assessment of knowledge and practices regarding menstrual hygiene among adolescent girls of Government higher secondary school, station Murhipar, Rajnandgaon (C.G.). The results show that although the majority of girls (85.8%) were aware of menstruation before reaching menarche, 87.2% of them did not know about the source of menstrual bleeding and only 2.1% used  sanitary pads while 37.6% used cloth pieces  and just 29.8% changed their cloths/pads three and above times per day. Data also indicated that the mother acted as the first informant for more than half of the girls, and a majority of girls (90.1%) practiced restrictions during menstruation. Regarding their hygiene practices, 98.6% of the girls took a daily bath with soap during menstruation and 34.7% of the girls disposed of their used cloths and sanitary pads by burning (34.7%), followed by burying (25.5%) and flushing (17.7%). The study suggests teaching mothers about menstruation and hygiene practices as they are often the first informant. 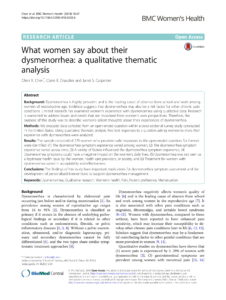 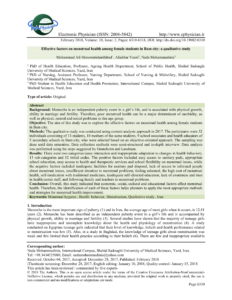 Morowatisharifabad et al. (2018) in a qualitative analysis with directed content analysis approach with 32 participants including students, mothers, school associates, and health educators of 5 Secondary schools in Bam city, Iran: Effective factors on menstrual health among female students in Bam city: a qualitative study identified two categories of ‘easy interaction’ and ‘inappropriate adaptation’ facilitating or preventing change of MHM behavior. ‘Easy interaction’ was defined as consisting of four sub-categories: (1)Easy access to sanitary pads, (2)Appropriate school education, (3)Easy access to health and therapeutic services, and (4)School flexibility on menstrual issues.’Inappropriate adaptation’ was defined as containing nine sub-categories:(1)Inadequate facilities for sanitary pad disposal, (2)Lack of access to informed people about menstrual issues, (3)insufficient attention to menstrual problems (they are assumed to be normal), (4)Feeling ashamed, (5)The high cost of menstrual health (the high costs of treatment and doctor’s visits), (6)self-medication with traditional medicines, (7)Inadequate self-directed education including CDs, books, booklets, programs in the media, and pamphlets, (8)lack of awareness and trust in health center staff, (9)following mothers’ and teachers’ advice instead of being referred to midwives or doctors in case of experiencing menstrual issues. The authors conclude that different factors impact upon menstrual health of girls, and suggest the importance of identifying of each of these factors to apply the most appropriate methods for menstrual health improvements. 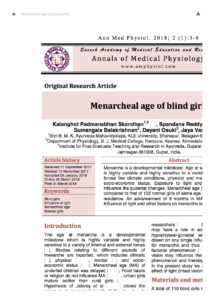 Skandhan et al. (2018) in a case-control study of 110 blind girls and 102 non-blind girls in the age group of 15-24 years from the state Gujarat and Bombay city:Menarcheal age of blind girls attempts to investigate the effect of light (intact vision) on menarcheal age found out that blind girls reach menarche nine months earlier than the control group with statistically significant difference and the results also indicate that there was no any statistical difference among blind girls who were blind from birth and those girls who became blind at a later age. 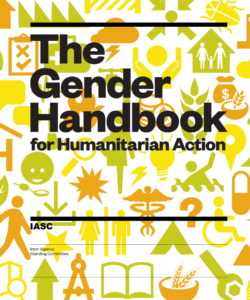 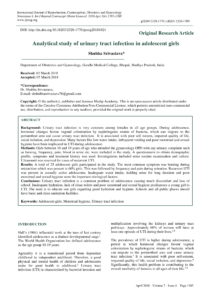 Srivastava, S (2018) reports on a cross-sectional study of 25 adolescent girls of age between 10 and 19 with urinary complaints attending gynecology ODP at a private clinic in Bhopal, Madhya Pradesh, India: Analytical study of urinary tract infection in adolescent girls. The results indicate that many girls had more than one complaint. The most common complaint was menstrual abnormality (44.8%), followed by pregnancy (19.8%) and UTI (9.1%). Regarding urinary symptom, 60% of girls complained about burning during urination, followed by frequency (40%), pain (36%) and blood in urine(12%). The data also indicate that 32% of girls practiced poor menstrual hygiene (indicated as full-body bathing,and use of non-disposable pads) and 60% of them had a positive urine culture which the most commonly found to be E.coli followed by Staphylococcal group. 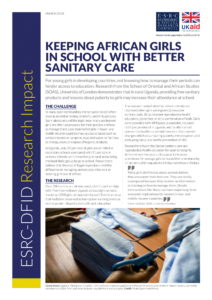 Tofaris, E. and Dolan, C (2018) in a trial over 24 months in a partnership with Plan International Uganda across eight schools in Kamuli District with 1,008 girls participating: Keeping African Girls in School with Better Sanitary Care aimed to investigate if school attendance would improve when girls were given (a) reusable sanitary pads, (b) adolescent reproductive health education, (c) neither, or (d) a combination of both. Results indicate that the provision of better sanitary care as well as reproductive health education over the course of two years tended to improve school attendance as there was an increase of approximately 17% in school attendance. Hence, the research suggests inclusion of adequate and gender-sensitive puberty education in the school curriculum can improve school attendance. 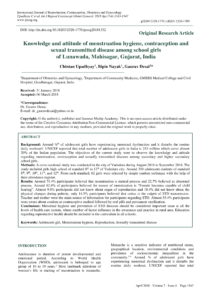 Upadhyay et al. (2018) report on a cross-sectional study with a sample of 310 female adolescent students at secondary and higher secondary school in Mahisagar district: Knowledge and attitude of menstruation hygiene, contraception and sexual transmitted disease among school girls of Lunawada, Mahisagar, Gujarat, India . The results indicate that a majority (71.4%) of participants believe that menstruation is natural process, more than 60% of participants see menstruation as becoming capable of child bearing, and 18.4% were not aware of the physical changes during puberty. Around 69.7% of respondents followed cultural and ritual restrictions during menstruation. Regarding STDs, 12.9% did not know about the symptoms of STDs: lower abdominal pain was reported to be the most common sign of STDs followed by fever, redness of skin, itching sensation and burning sensation with urination. Moreover, 79% of participants did not know about preventive measures for STDs and only 14.5% believed that STDs transmit through coitus. The main source of information regarding menstruation was the mother, for STDS it was both teachers and mothers. With regard to knowledge of contraception, 75.2% of the participants had knowledge of contraceptive methods and about half were aware of condoms and oral pills. Friends and mothers were considered as the most frequent source of information about contraceptive methods. 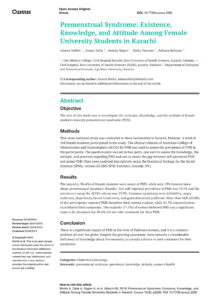 Mohib et al. (2018) in a cross-sectional study with a random sampling of 448 female students in three universities in Karachi, Pakistan: Premenstrual Syndrome: Existence, Knowledge, and Attitude Among Female University Students in Karachi aimed to identify the prevalence  of, as well as knowledge and attitude of female students, towards premenstrual syndrome (PMS) and to assess the gap between self-perceived PMS and actual PMS. The clinical criteria of the American College of Obstetricians and Gynecologists (ACOG) for PMS were used for the assessment. The majority (96.4%) of the students were aware of PMS, while only 19% knew about premenstrual dysphoric disorder. The self-reported prevalence of PMS was 79.5%, whereas the prevalence (using the ACOG criteria) was 23.9%. Common symptoms were irritability, angry outbursts, depression, breast tenderness, and gastrointestinal problems. More than half (60.4%) of the participants reported PMS disturbed their normal routine, while 81.5% reported that stress exacerbated their symptoms. The majority (77.5%) of women believed PMS was a significant issue to be discussed but 49.4% did not seek treatment for their PMS. Analgesics (41.7%) and doing exercise (17.7%) were the most common methods used to relieve PMS.