On the 30th of October – a rainy day in Kampala it turned out – the 7th Virtual Conference on MHM (Menstrual Hygiene Management) in Schools was being held at the University of North Carolina. The background for the conference was the ten-year agenda for MHM in schools, created in 2014 by UNICEF and Colombia University, that by 2024 “girls around the world are knowledgeable about and comfortable with their menstruation, and are able to manage their menses in school in a comfortable, safe and dignified way.”

At the conference, presented projects related to menstrual health from a number of different countries. Bangladesh, Malawi and Ghana were some of the places hosting different projects aiming at creating better MHM conditions for adolescent girls in schools. From WoMena’s perspective, we were proud to see the MENISCUS-2 (short for Menstrual Hygiene and Safe Male Circumcision Promotion in Ugandan Schools) had been selected to be presented at the conference. The MENISCUS-2, has been led by London School of Hygiene and Tropical Medicine and MRC/Uganda Virus Research Institute and has been following up on the findings from the Meniscus-1 study, which was one of the first projects that WoMena Uganda was involved in. Some of the central findings was that poverty and menstruation are significant barriers to school attendance for girls.

For instance, 20% of the girls in the study reported to having missed school in the last month due to having their period. Since menstrual pain played a big role in girls being absent from school, it was decided that MENISCUS-2 should centre around improving MHM and thus improve the possibility for attendance among girls in the two secondary schools in Entebbe chosen for the project. This was done through a five point intervention:

1. Improvement of toilet facilities
2. Provision of painkillers through a voucher scheme
3. Performance of a drama skit by the students to their friends, families and community
4. Training of trainers selected from motivated teachers and female students and training of senior 2 students (both boys and girls) as well as distribution of a menstrual health kit including reusable pads to senior 2 girls.
5. Puberty training for teachers

WoMena has been a key implementing partner on the distribution of the menstrual health kits and the drama skit, which has been created by the students with the help of a drama teacher. It evolves around the girl Kyolaba who experiences her first period. The opening scene shows a classroom setting with students and a strict teacher doing maths on the board. In walks Kyolaba, hands to her stomach with pain on her face. The teacher is less than understanding and addresses the situation with scolding and even violence. Her friends advise her to go to a senior female teacher, but she is also more hurtful than helpful. The plot has many twists and turns but in the end Kyolaba finds good advice and useful menstrual products from her friends. 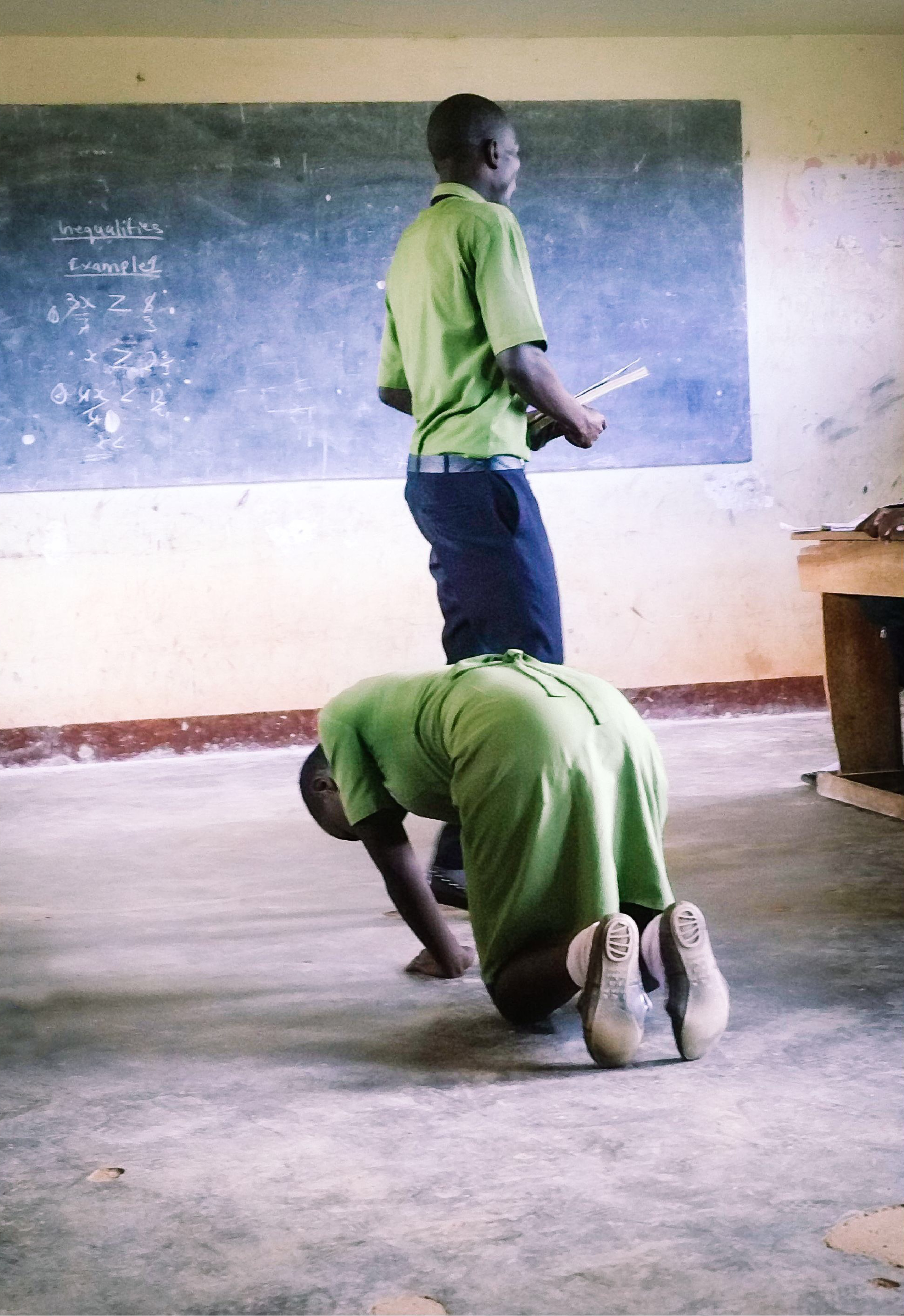 Drama skit performance made by the school students

Recently, the drama skit was performed by the students at their school for a group of MHM researchers and other stakeholders; as well as some of the actors’ curious schoolmates looking in through the windows. The skit ended with the students taking turns presenting themselves and the part they had played. They then answered questions from the enthusiastic audience about working on the skit. Both girls and boys said that they now felt less fear in talking about menstruation. One boy said: “In the beginning, my friends all asked me how I could be in a menstruation play about a girl having her period. I said I am a boy, but I have sisters and friends who are girls.” A mother to one of the students in the study, who watched an earlier performance, echoed the experiences of improved ability to talk about menstrual issues and male understanding of it: “When we all saw the skit, it gave us a starting point to initiate a discussion with our children. Even men got it”. Angela Nakafeero, Gender Technical Advisor for the Ministry of Education and Sports, said about her impression of the skit: “It was very good, especially the way it not only dealt with sanitation but many of the other things related to menstruation like violence, taboo, absenteeism, and so on.”

“When we all saw the skit, it gave us a starting point to initiate a discussion with our children. Even men got it” – Mother of a student

At the MHM conference, Dr. Catherine Kansiime from Medical Research Council/Uganda Virus Research Institute and London School of Hygiene and Tropical Medicine Uganda Research Unit talked about the general state of MHM in Uganda. She highlighted the importance of having government support and focus on the issue before moving to MENISCUS-2. 450 girls and boys between the ages of 12 and 21 from one private and one government school were part of the project which ended in August, and the results are positive: Generally there has been a substantial improvement in knowledge of puberty and menstruation for the students, who also report a reduction in anxiety and stigma. 59% of the girls said they felt anxious about their next period at the beginning of the project, this number was down to 34% at the end. The percentage of girls, who said they were being teased by other girls and boys had also dropped significantly, and there was in general less association between menstruation and girls being absent from school. Overall it was proven that improving MHM can have a huge positive impact on girls’ education, health and well-being, and plans are now in the works to implement the MENISCUS-2 intervention package to 30 schools and evaluate if the effects are as positive on a larger scale.