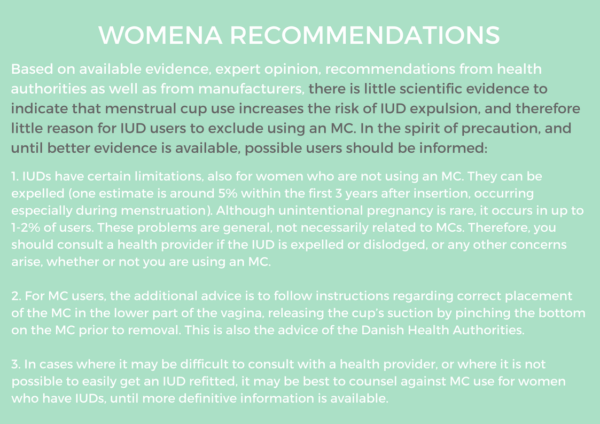 QUESTION: Can you use a menstrual cup (MC) when you are also using an Intra-Uterine Device (IUD)?

IUDs are one of the most widely used means of contraception, but the proportion of women who use IUDs ranges widely (ESHRE 2008). The most recent estimates from the United Nations are that around 0.9% of women* in Uganda are using IUDs, in Denmark rates are higher, with the most recent UN estimate at 23.9% (UN 2018)**.

IUDs can be unintentionally expelled (partially or completely)***, or intentionally removed by either a health provider or the woman herself (Foster, et al. 2014).

Intentional removal rates can be substantial, with one estimate from the US at 10% after one year and 50% after 5 years, either because women want to become pregnant, or due to pain or menstrual irregularity (ESHRE 2008).

Here we refer to unintentional expulsion.

Expulsion does not cause harm to women, however, unintentional expulsion means the woman needs to replace her contraceptive method, to avoid unintended pregnancy (Jatlaoui, et al. 2017).

One estimate is that unintentional expulsion of IUDs occurs in ∼1 in 20 women, with the highest rates in the first 3 months after insertion, and often occurring during menstruation (ESHRE 2008). Other estimates are higher, at 10% within 3 years (Madden, et al. 2014).  Identified risk factors for expulsion include heavy menstrual bleeding (Meirik, et al. 2009; Petersen, et al. 1991), incorrect placement of the IUD (ESHRE 2008), young age (esp. aged 15-19 years) ((Jatlaoui, et al. 2017; Madden, et al. 2014) and time of insertion after giving birth (higher risk for insertion immediately after delivery) (Lopez, et al. 2015). There is no evidence to suggest a correlation between endometrial length**** and IUD expulsion rates (Bahamondes, et al. 2011).

IUDs are very effective in preventing pregnancy. However some pregnancies do occur (with most estimates, depending on type of IUD, in the range of 1-2% (NetDoktor ; NICE).

The question then is – does the use of MCs increase the risk of expulsion/pregnancy? One of the few published studies finds that, in the study population, there was no evidence that women who reported using MCs, or tampons, had increased rates of early expulsion. The authors conclude that potential contact between tampons or menstrual cups and the IUD strings is not sufficient to remove the IUD when the IUD is correctly positioned in the uterus (Wiebe and Trouton 2012).

In Denmark, the Health Authority in 2012 (SST, 2012) reported three cases of IUD position change after usage of a menstrual cup*****. The plausible reasons given were:

As mentioned above, there are many risk factors for unintentional expulsion, including heavy bleeding during menstruation. IUD expulsion can mistakenly be attributed to menstrual cup usage instead of the coincidental risk factor. However, anecdotal evidence****** from a few women is that the IUD was expelled as they removed the menstrual cup, which seems less likely to be coincidental.

RECOMMENDATIONS BY HEALTH AUTHORITIES AND MANUFACTURERS

The WHO recommendations for medical eligibility for contraceptive use make no recommendation regarding avoiding menstrual cups while using an IUD (WHO 2015).

We could find no recommendation from Ugandan Health Authorities.

The Danish Health Authority, reporting on the three cases of IUD position change, does not recommend that IUD users should avoid MC use. However, it recommends that women using an IUD as well as a menstrual cup be informed that they should regularly check the position of the IUD strings (as is recommended for all IUD users), place the cup correctly at the bottom of the vagina, and ensure the negative pressure of the cup is released before removal (Sundhedsstyrelsen 2012). Several manufacturers have similar recommendations, concluding that having an IUD is not a contra-indication for MC use; however, care should be taken for correct use as listed above, adding a recommendation to avoid grasping the strings of the IUD.  All recommend consulting a physician if concerns arise (MoonCup ; RubyCup).

*Estimates are for married or in-union women of reproductive age

**More uptodate estimates would be welcome

****Endometrium is the inner lining of the uterus -and therefore whether a short uterus (e.g. in women who have not had a pregnancy) have a higher risk of IUD expulsion

*****The 3 reports are from women using the NGO Sex&Samfund’s clinics. The chief medical officer of Hvidovre Hospital, Charlotte Wilken-Jensen, is also the medical advisor for Sex&Samfund https://politiken.dk/forbrugogliv/sundhedogmotion/velvaere/art5412634/Overlæge-advarer-Hypet-menstruationskop-kan-have-en-uheldig-bivirkning

******Given the limited scientific evidence, we assemble anecdotal evidence, from WoMena members or others

MoonCup. Is it safe to use the mooncup with an IUD or IUS (Coil)Accessed 26 April 2018.