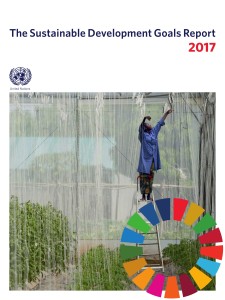 The UN has released The Sustainable Development Goals Report 2017. Under GOAL 4 (quality education) it notes that, in 2011, less than half of schools in sub-Saharan Africa provided access to drinking water, and just 69 percent were provided with toilets. Many did not have separate sanitation facilities for girls and boys.  GOAL 6 (Water and Sanitation) also has a target which calls for providing facilities with attention to the special needs of women and girls. However, progress is not reported for that target. 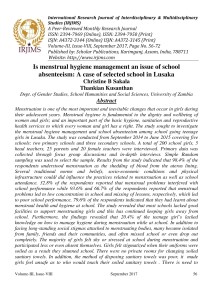 Sakala CB et al. (2017) in a cross-sectional study with mixed method approach in two schools in Lusaka, Zambia seeks to determine Is menstrual hygiene management an issue of school absenteeism. The findings are that the majority of schools are without proper MHM facilities. 93.6% and 66.7% of girl students report that menstrual issues result in low concentration in school and missing lessons respectively. The main reasons given are feeling shy and stressed thinking about pain and leakage. The authors conclude that the findings reflect students’ lack of knowledge on MHM in school, and suggest including menstrual hygiene education at primary and secondary school curricula. 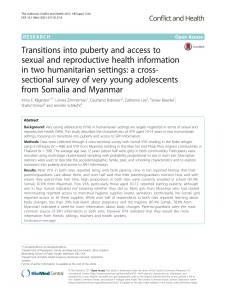 Kågesten AE et al. (2017) in a cross-sectional survey of very young refugee adolescents (VYA) aged 10-14 years from Somalia (in Ethiopia) and Myanmar (in Thailand) describe transitions into puberty and access to sexual and reproductive health information. The study finds inadequate knowledge regarding SRH as well as insufficient accessibility to MHM supplies for Somali VYAs. VYAs express closeness to their parents/guardians and that they are their main source of SHR information. The study suggests that providing education at this early stage, going beyond a sole focus on risk factors related to SRH outcomes, and preferably considering the role of parents/guardians, would be an opportunity to impact later SRH outcomes. 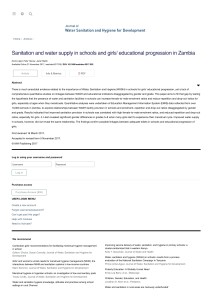 Agol D et al. (2017) in a quantitative study assessing the role of sanitation and water supply in schools and girls’ educational progression  analyzed data from 10,000 schools in Zambia, to test whether the presence of water and sanitation facilities in schools can increase female-to-male enrolment ratios and reduce repetition and drop-out-ratios for girls, especially at ages when they menstruate. The findings confirm possible linkages between adequate toilets in schools and educational progression of girls, especially in grades 5-8. No linkage was found with improved water. 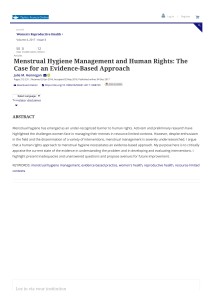 Hennegan (2017) in an overview article Menstrual Hygiene Management and Human Rights: The Case for an Evidence-Based Approach argues for the importance of an evidence based approach to prevent the harm that poor MHM causes. The author argues for better exchange of knowledge between academic and programmatic actors in order to develop approaches to MHM that are responsive, utilizable and sensitive to local needs. The author cautions against focusing attention only on hypothesized correlations between interventions and outcomes (such as education or employment), and failing to improve MHM if evidence does not support those correlations.